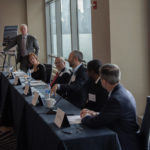 JERSEY CITY, N.J., Mar. 22, 2019 – Legal experts and commercial real estate developers came together to share their perspectives on Qualified Opportunity Funds, examining the potential risks and rewards for investors as well as for developers who are considering this new source of capital.

Michael Novak, president of Atlantic Environmental Solutions Inc. (AESI), moderated the panel discussion during the recent “Qualified Opportunity Funds Forum” in Jersey City. The event was hosted by the National Realty Club (NRC), a premier membership club that promotes business opportunities by connecting real estate principals, developers and other service professionals who know how to get deals done.

The 2017 Tax Cuts and Jobs Act created a means for taxpayers faced with a large tax liability to defer capital gain income by reinvesting the gain proceeds into a Qualified Opportunity Fund (QOF). This vehicle is designed specifically to fuel investment in properties in low-income communities that have been designated as Qualified Opportunity Zones (QOZ).

The law provides that only the gain can be reinvested into the QOF, not the total proceeds, which is different than the tax deferral rules for like-kind exchanges. “A QOF is a viable option for both real estate and non-real estate capital gains,” said Silverstein. “The gains can be from the sale of securities or goodwill from the sale of a business. Instances in real estate which do not qualify for a 1031 exchange are also great candidates for investing in a QOF.”

Capital gains must be reinvested in a fund by 2019, and are deferred from Federal taxation until exit from a QOF or December 31, 2026, whichever comes first. The tax rates on original gains reinvested in property held for the long term are discounted by 10 percent at the five-year mark and by an additional five percent after seven years. If the taxpayer holds the reinvested property for 10 years, the gain on the sale is Federal tax-free.

Citron noted, “States are not always in lockstep with what the Federal government does, but New Jersey has just agreed to follow their lead.”

A Potential Source of Capital for CRE Developers

QOFs present a potential capital source for developers considering investing in areas that can benefit from revitalization. Designated Opportunity Zones have been identified by the Federal government as economically distressed population census tracts where job growth and income have lagged behind national averages.

“You must start with a tangible qualifying property acquired by purchase after 2017 from an unrelated party,” Citron explained. “The original use of the property must begin with the acquisition by the QOF. The property must then be built on or substantial improvements made to an existing building within 30 months.”

Novak noted the tight timeframe restricts the kind of deals that can get done, and Citron suggested this regulation might change in the future. “There will be enough political pressure to ensure that for the program to really work, it must be done the right way.”

Asked what projects might best benefit from the Opportunity Zones program, Delaine said developers need to focus on those in which they are already investing. “We purchased a property in Harlem and will be creating an Opportunity Zone fund. Getting cheaper capital into deals we’re already doing is the magic space for us. But you really need to be looking at something that is shovel-ready now to make the 30-month timeframe work.”

Gibbons noted that the program can support municipalities looking to finance redevelopment projects. “Smart municipalities with projects they want to make happen should be proactive in marketing themselves to the large Wall Street funds.”

Milberg added that “regardless of the incentives, it has to work as a real estate deal. Some people are looking for Opportunity Zone deals because of what the program sounds like at a high level and ignoring what the real estate might actually be worth.”

Gibbons agreed. “Being in an Opportunity Zone can improve a good real estate deal, but it won’t make a bad deal better.”

Much of the discussion among the developers on the panel focused on the lack of clarity in the program’s current rules and regulations. “There are billions of dollars being allocated to Opportunity Zones, so the demand to get into a project is great,” said Milberg. “But there are many unanswered questions resulting in a lot of hesitation.”

Among these “grey areas” is the question of which “substantial improvements” allow a property to qualify for the tax incentives. Currently the land value of a property is not counted, so the cost of environmental remediation of the land would likely not be taken into account.

“This is a critical issue given the high incidence of contamination found during the redevelopment of underutilized sites,” said Novak. “Without proper treatment of costs associated with investigation, assessment and cleanup, developers will have less incentive to invest in properties with any significant environmental contamination.”

The U.S. EPA’s Office of Brownfields and Land Revitalization has requested that the IRS reconsider this issue, and that final guidance clarify that funds applied to environmental remediation should qualify under the QOZ program.