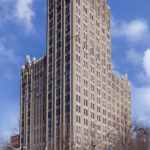 NEWARK, N.J., Sept. 29, 2017 – Miles Berger, CEO of Berger Organization saw the potential of building up downtown Newark decades ago—his diversified real estate company has been investing in and developing office and hospitality space in downtown Newark for over 30 years. The demand for quality office space in downtown Newark has been growing over the decades and Berger Organization has announced that some of those investments now enjoy 100 percent occupancy: the Military Park Building, the Robert Treat Center and 58 Park Place.

All three buildings are located across from the Military Park in the city’s central business district, which underwent extensive renovations in 2014 similar to those of Bryant Park in midtown Manhattan. It now has a carousel, restaurant, ping pong tables and free Wi-Fi amid updated landscaping. Berger said that demand to be across from the park has risen over the past three years because of the renovations.

“The park has become an attraction, drawing more people to the area and providing an attractive spot for office workers to take a break or meet after work, further fueling office space demand in the neighborhood,” he said. Military Park is near the new Prudential office tower, luxury apartment developments and upscale businesses such as Starbucks and Whole Foods. Leasing has been brisk among a diverse array of businesses that are setting up shop in the area.

“Since the park reopened in 2014, rents on our office spaces have risen three to five dollars a square foot and room rates at the Robert Treat Hotel have gone up more than 35 percent,” noted Berger. The Robert Treat Hotel is adjacent to the Robert Treat Center, located at 50 Park Place, which offers prime office and conference space; both are owned and operated by the Berger Organization.

“Of special note is that this is the first time the Military Park Building at 60 Park Place is fully occupied since our company fully acquired it 10 years ago, which speaks to the continually growing demand for Class A office space in Newark, especially near this beautiful park,” added Berger.

A diverse range of tenants

Tenants in the historic building include several non-profit organizations and associations that serve the residents and business community of Newark and the surrounding region:

There are also approximately a dozen law firms and a retail branch of M&T Bank on the street level.

Near NJ Performing Arts Center, Prudential Center, and the Newark Museum, as well as several institutions of higher learning, the Military Park area offers corporate tenants many options and conveniences, in a range of commercial properties from vintage to contemporary.

The neighborhood is easily accessible to major highways, and a light rail transit line takes riders to Newark Penn Station, where they can catch a train for a short ride to midtown Manhattan or points throughout the region. Newark Liberty International Airport is close by as are major shipping ports. Many of the city’s older buildings are being repositioned for new retail, commercial and multifamily development, including projects on Berger Organization’s drafting tables. These include converting the old St. Francis Hotel into a TRYP By Wyndham hotel, scheduled to open in January 2018, and the historic Griffith Piano Building, slated for redevelopment into office space.

“We have long believed that the City of Newark would once again shine as a major commercial hub,” said Berger. “The surge in occupancy in our buildings is just one sign that redeveloping the city’s commercial properties attracts quality tenants who appreciate being in a revitalized urban center.”

For more information about the Berger Organization, visit www.bergerorg.com.

About The Berger Organization