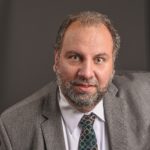 NEWARK, N.J., Nov. 8, 2017 – Harry Prott, the former general manager of the Newark Club, has joined the Robert Treat Hotel as its director of catering sales. Prott came on board at the historic hotel on October 1; in addition to banquet sales, he will run and oversee parties in the newly renovated Crystal Ballroom and Tri-State Ballroom.

The Robert Treat Hotel, which celebrated its centennial last year, is owned by the Berger Organization, a diversified real estate development and management firm that has played an active role in downtown Newark’s revitalization. Prott, who not only has worked in the city for 30 years, but grew up in its Ironbound district, has witnessed the urban renewal firsthand.

“The entire downtown area has been undergoing a huge transition, most recently with a lot of new residential development,” noted Prott. “Along with people come social occasions, so we hope to attract more residents who are looking for an upscale venue for their receptions as well as more corporate and political events.”

The Tri-State Ballroom, the largest in the region, is ideally suited for large conferences and trade shows as it can accommodate up to 1,200 people. It was the recent site of President Obama’s visit to New Jersey to endorse gubernatorial candidate, Phil Murphy and hosted a legislative forum in September.

Prott had been with the famed Newark Club from its opening in 1992 until its closing in February 2017, starting as catering manager before becoming GM. The private executive club and catering venue, located on the top floor of One Newark Center, was frequented by members of Newark’s business, legal and political community. Over the years, Prott developed strong relationships with many of the club’s clientele, who he hopes to bring to the Robert Treat Hotel for events.

“Harry Prott has been a fixture on the Newark business and event scene for decades; we are fortunate to have someone with his breadth of experience in fine dining, catering management and sales at the Robert Treat Hotel,” said Miles Berger, CEO of the Berger Organization.

“Having known Miles Berger for years on a professional level, I’m excited to be part of the hotel’s next chapter as I keep my Newark roots going and growing,” said Prott, who is also known for his portrait, fine art and event photography. His work has been shown at local galleries, some of his pieces hang in One Newark Center and in Senator Cory Booker’s office, and several photos will be included in a coffee table book sponsored by the Newark Downtown District.
For more information about the Robert Treat Hotel’s banquet facilities, visit www.rthotel.com.