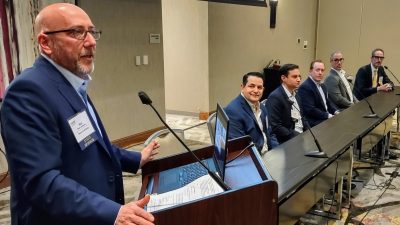 The “Hot Money” is Chasing Industrial
Lechtman began the discussion by asking where the “hot money” is currently in terms of deals. “It’s very simple: the hot money is all chasing industrial,” said Neuer, executive vice president for New Jersey Capital Markets for CBRE. “Everything that can possibly be knocked down and developed into industrial is being knocked down and redeveloped in the State of New Jersey. So, the hot money is in industrial and apartments; after that, medical office and life sciences.”

Neuer noted that retail is making a comeback and he sees a trend toward people returning to the office. Citing as an example that Pfizer recently leased 400,000 square feet, he said, “Every office tenant in the market wants their people back. Otherwise, they wouldn’t be taking new space.”

Klein, a senior managing director with JLL Capital Markets, addressed the question of financing given current fluctuations in the market. “It’s going to be a bumpy time right now, and we don’t know where the rates are going to shake out. But people that are developing industrial, people that are buying – at this point a big vacant industrial building is worth more than an occupied industrial building, because it’s all about rent growth. With a value-add business plan in place there is no lack of liquidity to buy it and fix it up. That money is pretty frothy – it has not been as impacted as some of the longer-term financing.”

Converting Suburban Office Campuses to Residential
Industry experts agree that the future of office in New Jersey involves converting Class B suburban campuses to residential. As executive vice president of Development and Construction for Kushner, Sommer said his firm is actively developing nine different projects in the state, which are predominantly multifamily. “Three were office properties that were demolished, knowing that office is clearly no longer the highest and best use of the property. We are very much focused on the redevelopment of these assets that really just don’t have a future in their current physical conditions.”

Responding to Lechtman’s question about how to underwrite development projects in the face of rising expenses and uncertainty about where rental rates are going, KABR COO Goldstein said, “Development is a rollercoaster ride. You’ve got to have a phenomenal basis on the land, and you’ve got to be dynamic. Some companies will pay more for land, but in exchange they want the option to get the approvals first before they start the development process. Everyone’s strategies are a little different. But you have to have a capital structure that allows you to handle bumps in the road.”

Controlling Development Costs by Taking a Vertical Approach
In light of ongoing challenges related to building materials, labor costs and logistics, some developers are taking a vertical approach in order to better control costs and timelines. Goldstein said that when KABR started developing low-rise buildings, general contractors they spoke with would inflate the numbers. “We couldn’t get deals done, so we said ‘let’s just start our own general contractor company.’ It’s a hard process, but it’s been rewarding. We have been able to save a tremendous amount of money and also control the process.”

With the exception of high-rise development, Sommer noted that Kushner is taking the same approach – and from an equity perspective, partners appreciate that there is greater control. “Goals are clearly aligned. When the GC is also the owner and sponsor, it creates a whole different perspective and makes everyone much more comfortable so long as the people producing the project have a track record.”

Guiding Clients in a Competitive Market
As an attorney dealing with the tail end of transactions, Schiller said current market challenges are impacting his ability to guide clients on both a business and practical level. “The reality is that, especially with industrial and multifamily, it’s an incredibly competitive market right now. If you are representing a purchaser, you’ve got to lock tight the LOI and make sure the deal terms are agreed on from the onset. If you are representing a tenant that is not in the real estate sphere, getting them to appreciate that there are going to be cost overruns, and they will be responsible for those cost overruns, is really important. Or if you represent a developer on a turnkey site, you have to be very concerned about whether or not they will be able to get the project built on budget and in the stated scope of time.”

Schiller is also seeing more and more landlords pushing tenants into deals with less than favorable terms. “When you are representing an industrial tenant looking to go into a building right now, there is tremendous pressure on that tenant to say yes to terms that, in a normal market, you would not accept in your wildest dreams. But a lot of the time tenants think they have no choice, because someone behind them will agree to those terms.”

No Lack of Liquidity
Neuer noted that buyers today are largely private equity firms. “For institutions, most of New Jersey, not all, is red lined. They got burned and there is nothing you can do to get them to come back. We deal with mostly private owners that are based in the tri-state area. They can see, feel and touch it. The local equity is seemingly never ending, and wildly impressive. And when there’s someone new, everybody is chasing them.”

At KABR, the majority of project funding is internal. “The Chairman and CEO – it’s half his capital,” said Goldstein. “The balance is from someone who wants to invest in real estate. It’s from friends and family. Our pitch is it’s all our own money, and we care about it immensely. We don’t have institutional capital, and that allows us to be disciplined in our investment strategy.”

Most of Schiller’s clients are selling, not buying. “My clients have largely been in a disposition mode over the past couple of years, liquidating and getting ready for the next cycle. I’ve started to see them taking that capital and purchasing some loans and things along those lines. They have been using their own capital at this point and self-financing, trying to stay out of the debt market.”

Noting there has been cheap debt for a very long time, Lechtman asked how this has affected clients’ perspectives and deal execution. “At the end of the day, there is no lack of liquidity in the market,” said Sommer. “There is a ton of money looking to be deployed, and right now we are just in the price-discovery mode. If you are a high-leverage buyer, that’s where you are going to get hurt. But if you are looking for long term financing, short term financing and everything in between, it’s still out there. You just need to adjust your expectations. I don’t think rates are going to go backwards from where we are. It’s the new normal.”

Klein said JLL is also seeing considerable price discovery happening in the market. “Over the last three weeks we have been getting calls from lenders. They want to know where things are pricing, and where they should price things. And it’s a herd mentality. If bank A is doing it this way, chances are banks B, C and D are going to follow suit. For the last couple of years, the credit guy has been put in the corner. Now those guys are having their time in the sunshine again. They are saying, ‘I told you so.’”