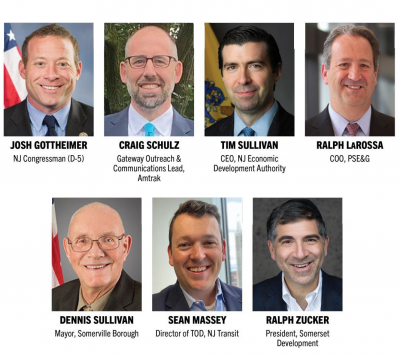 EDISON, N.J., Dec. 13, 2021 – Experts from the public and private sectors discussed critical infrastructure issues and initiatives at the federal, state and local levels during NAIOP New Jersey’s Infrastructure Update, which was held at the Northeast Carpenters Apprentice Training Center in Edison.

In his opening remarks, New Jersey Congressman Josh Gottheimer – who is co-chair of the bipartisan Problem Solvers Caucus – addressed the current status of federal infrastructure funding and emerging national priorities.

“We have been working with a group of senators on two major pieces of legislation,” said Rep. Gottheimer. “The Bipartisan Infrastructure Investment and Jobs Act provides funding for our roads, our rails, the Gateway Tunnel, broadband, water infrastructure, and resources for electric vehicle charging stations – all of which are very important, particularly for New Jersey. This is a once-in-a-century infrastructure bill, and it is a game-changer for us.”

Rep. Gottheimer also spoke about what President Biden calls the Build Back Better bill. The legislation, which was passed by the House and is working its way through the Senate, focuses more on social infrastructure, including affordable childcare with pre-K, climate change and providing relief to taxpayers – especially those in states with a high cost of living like New Jersey – by restoring the federal deduction for state and local taxes (SALT).

Asked about the process for distributing the $1.2 billion in federal infrastructure funds and where it will go in New Jersey, the Congressman said that funding streams vary. “Some of the resources have already been allocated based on established priorities. For example, Gateway is something we fought for and that money is predetermined. The distribution of other resources is formula-driven. New Jersey will get a certain level of resources based on a national formula, and that’s how most of the funds will be distributed. The state also has a set of projects and priorities, and has its own process for deciding how it allocates funds.”

Gateway Update: Shifting from Planning to Delivery
Craig Schulz, who leads Amtrak’s outreach and communications on the Gateway Program, said that what has been called the most critical infrastructure project in the nation is now shifting from the planning to the delivery phase. “The renewed federal partnership has been tremendously beneficial to us. With funding in place, it will grease the skids for work to move forward in the Northeast Corridor and beyond.”

While the focus of the program has been on construction of the new Hudson Tunnel (set to begin in 2023) and North Portal Bridge (scheduled for early 2022), Schulz said, “Gateway is more than just the tunnel and bridge. They eliminate two major points of failure, but it is a suite of projects that will expand a two-track system to four tracks, doubling capacity and modernizing the busiest rail corridor in the Northeast.”

Key among these projects is expanding the track and platform capacity of Penn Station to service increases under Gateway, which involves collaboration between Amtrak and NJ TRANSIT. Projects in New Jersey include replacement and rehabilitation of several bridges, track relocation, and developing a new Secaucus/Bergen Loop that would eliminate the need for many NJ TRANSIT rail passengers to transfer at Secaucus – creating a one-seat ride to Manhattan. “These are the kind of transformative benefits we are talking about,” said Schulz. “There will be a lot of excitement around these second-phase capacity projects now with infrastructure funding in place.”

Clean Energy and The Electric Grid
Ralph LaRossa, COO of Public Service Enterprise Group and president and COO of PSEG Power, highlighted PSEG’s priorities in response to climate change, transitioning to clean energy and improving the reliability of the electric grid. These include:

As CEO of the NJ Economic Development Authority, Tim Sullivan is committed to making New Jersey a national model for inclusive and sustainable economic development. “The reality of climate change is here – not over the horizon,” said Sullivan. “It’s easy to get depressed about that, but from an economic development perspective, it’s a cause for optimism. There are enormous opportunities to be had amidst this crisis.”

Sullivan divided those opportunities into two categories: defense and offense. Defense involves improving the infrastructure, making things more resilient, strengthening flooding defenses and upgrading the energy grid. “There are unprecedented dollars coming our way in New Jersey to make these defensive investments,” he said. “In terms of development, where and how we build is important. We have to build the right way, and be respectful of what flood maps look like and might look like. We know way too much now about what the future is going to look like to not take that seriously.”

On the offensive side, Sullivan sees clean energy as an enormous economic development opportunity – and wind energy tops the list. “There are a lot of big companies who are not politically motivated who see a lot of opportunity,” he said. “It is a competitive marketplace, but New Jersey has a real shot at being the capital of American offshore wind, South Jersey in particular. It could be the Houston of a brand-new energy industry.” Sullivan cited the New Jersey Wind Port – the nation’s first purpose-built offshore wind marshalling port – which is already under construction in Salem County, as well as the potential for the industry to generate tens of thousands of jobs and education opportunities.

Local Infrastructure: Somerville Transit Village Case Study
Looking at infrastructure from a local perspective, three of the key players involved in developing the Somerville Transit Village discussed the challenges of bringing a more urban approach to suburbia by combining residential, retail and civic functions alongside an existing transit node.

Mayor Dennis Sullivan, who has served as Somerville Borough mayor since 2018, described the history of the project as “a long, strange trip” that began in 1998 when the borough’s landfill site was designated for redevelopment. Discussions with NJ TRANSIT about redeveloping the property around the train station began in 2005, but it wasn’t until 2014 that NJ TRANSIT and Somerset Development joined forces to bring the project to fruition. The first apartments and townhouses were available for occupancy this fall.

“We went through various proposals – including doing absolutely nothing – but none of them were economically feasible so they never gained traction,” Sullivan said. “But we knew we had an asset that most communities would drool to have – a train station – and could not have had a better set of partners than NJ TRANSIT and Somerset.”

Ralph Zucker, president of Somerset Development, was attracted to the opportunity to partner with the municipality to create an innovative community based on the principles of New Urbanism. “We are focused on human scale environments, and we like to create places that are walkable and transit-oriented. Somerville has a vibrant downtown, good government, and offered us a great community to work in and great people to work with.”

“There was buy-in very early on at the local level,” said Sean Massey, who as senior director of Transit Oriented Development with NJ TRANSIT, is responsible for the agency’s property development initiatives. Massey cited the importance of upfront planning at the local and county levels, with support from the New Jersey Department of Transportation, in developing a plan that made sense and truly reflected New Urbanism living.

“Process wise, from there it was ensuring continued communication and collaboration between NJ TRANSIT and the borough, making sure that the public side was aligned in its objectives and priorities. Kudos to the project team for being in lock-step with the borough throughout the entire process.”

Zucker added, “It was a process that was expensive and took way too long, and there were moments where the whole thing almost collapsed. But in the end, we had dedicated partners and everyone was willing to compromise. I hope that with the success of projects like this, there will be a mutual trust in the future and we can get to the finish line quicker.”