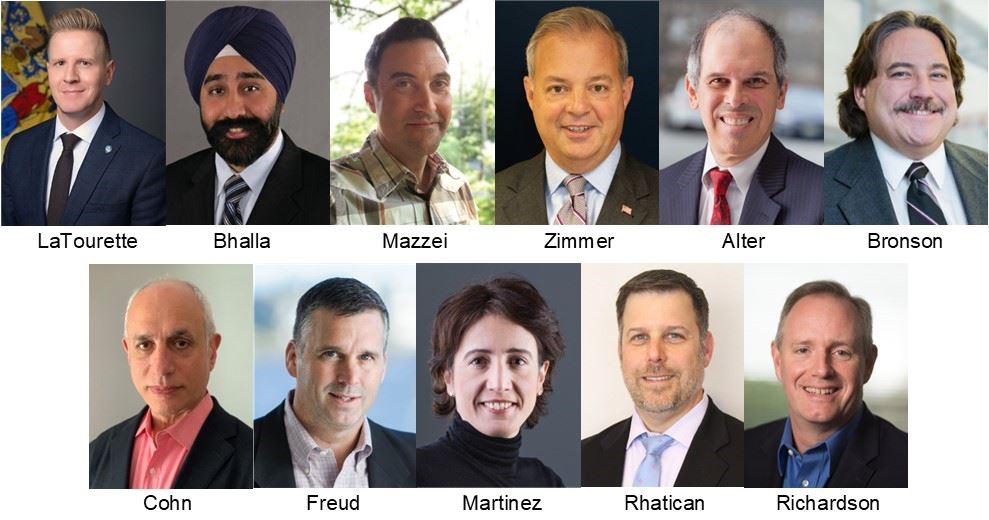 LaTourette discussed the agency’s current priorities in responding to the threats of climate change. In January 2020, Governor Murphy signed Executive Order 100, known as NJ PACT (Protecting Against Climate Threats), directing the DEP to integrate climate change considerations into every regulation. “We started by focusing on how to reduce and respond to climate change,” said LaTourette. “We considered what mandatory reduction measures we were going to put into place, and then how we can ensure that what we build today stands the test of time.”

Reduction priorities include a proposal aimed at reducing emissions over time, starting with the dirtiest power plants, and working with port businesses to modernize cargo equipment. On the resilience side, LaTourette emphasized the need for education. “New Jersey is at risk to some of the most adverse climate impacts on this planet. We must, at a minimum, be climate risk informed because we are not. That is a problem from a business perspective, and it will ultimately be a problem for every single project that any one of us wants to see built.”

Addressing the risk of sea level rise – what he called one of the most perceived controversies with the PACT reform – LaTourette said, “The modeling of that risk shows a range of outcomes, among them a percentage chance we may be wrong. How we’re approaching that reality is not to say we’re not doing anything until we know for certain. Because once we know, it will be too late. All we are saying, at the end of the day, is that we have to expand the area that we typically think of as worthy of examination and protection as a flood zone.”

LaTourette encouraged attendees to challenge the belief that protecting the environment jeopardizes development potential. “There is more than one way to achieve our environmental goals and our economic development goals. I can promise that this DEP will always find a way to help you.”

Climate-Informed Investments: Infrastructure and Transportation
David Zimmer, executive director of the New Jersey Infrastructure Bank, led a discussion about climate-informed infrastructure investments. Asked how dealing with storm surge, sea level rise and climate change on a daily basis has impacted his administration’s approach to managing the city, Hoboken Mayor Ravi Bhalla said, “The short answer, as the commissioner alluded to, is climate change is impacting everything in the operation of local and state government across the board, and we’ve taken that approach in Hoboken.”

The city’s extensive climate action plan includes working with developers to integrate climate considerations into projects on the front end to help ensure they stand the test of time. “It makes our community more resilient to climate change and it makes development more attractive and sustainable,” said Bhalla. Creating more open space like the city’s three resiliency parks is also a top priority – projects Bhalla says are made possible by accessing low-interest financing though the New Jersey Water Bank.

Jonathan Cohn, associate vice president and Transportation Architecture practice leader with AECOM, said the firm has developed a new practice based on addressing the issues of sustainability, resiliency and climate change. “We are working with communities across the country to talk about how to leverage infrastructure to create meaningful projects and add value. We’re excited about the potential for new investment in addressing the climate change threat.”

Willis Towers Watson’s director of Climate Risk Analytics for the Climate and Resilience Hub, Dr. Nidia Martinez, spoke about mitigating risk to assets and using insurance as a last resort. “The way we address climate with a client is usually when they want to talk about catastrophe insurance,” said Martinez, who helps clients identify currently at-risk assets and those that will become risks with the projection of climate change. “It’s about understanding your risk and managing it. We understand that sometimes people have other priorities. But believe me, climate is a priority if you want to be able to continue doing business.”

The Impact of NJ PACT on Commercial Real Estate
A second panel, led by Jay Rhatican, director of Land Use and Development and assistant general counsel for Hartz Mountain Industries, addressed the impact of New Jersey’s ambitious PACT initiatives on commercial real estate development. Vincent Mazzei, the DEP’s assistant commissioner for Watershed and Land Management, explained that the PACT rulemaking focuses on Coastal Zone Management, the Freshwater Wetlands Protection Act, Stormwater Management and Flood Hazard Area Control Act. “Most of the changes we’re contemplating are going to be in the flood hazard rules, but we are planning to propose in the fourth quarter of this year changes to all four of these rules.”

Noting the agency’s overarching goal of developing regulatory standards that are commensurate with the anticipated level of risk as well as preserving long-term economic health, Mazzei focused his comments on ways to protect against future inundation and flood risk and how to protect critical facilities and infrastructure. These include establishing a new regulatory area known as the Inundation Risk Zone (IRZ) to account for land inundated by sea level rise, redefining the tidal flood hazard area, and redefining the fluvial flood hazard area to account for increased precipitation and runoff.

“The IRZ consists of currently dry land that is expected to be inundated by tidal waters daily by 2100, said Mazzei. “It encompasses all land that lies below the IRZ elevation, which is calculated by adding five feet to the elevation of the mean higher high water. Development within the IRZ will be subject to more protective standards. It needs to be mindful of and acknowledge these risks.”

The New Jersey Office of Emergency Management’s Christopher Testa advised, “As you think about investments or your current portfolio, you have to think about where they sit in an interrelated system, the vulnerability of the system that supports a given structure, and who owns the risk associated with that system. It is pretty easy to track what the federal government is going to backstop. It gets a little scarier when you start to think about a state like New Jersey, which is not always flush with the capital to backstop things that are potentially going to be vulnerable.”

Assessing the potential impacts on commercial real estate, Walter Bronson, Associate/Land Development Department manager with Dewberry Engineers, said, “It was good to hear the commissioner speak of being able to find ways that we can make a project work, both environmentally and for the developer.” He expressed concern that new goals like adding five feet to the floodplain could make it cost prohibitive to rebuild the major cities on New Jersey’s waterfront. Making the case that regulations for homes should be different than those for structures like hospitals and power plants, Bronson said, “We need to look at a shorter time frame rather than out to 2100, put in a couple of feet now and reassess it in five to 10 years.”