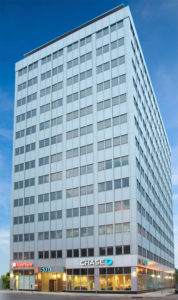 NEWARK, N.J., Jan. 10, 2018 – New Jersey Insurance Underwriting Association (NJIUA) has leased 7,500 square feet of Class A office space at 570 Broad Street in downtown Newark, N.J., which is owned by The Berger Organization. NJIUA, which had been at 744 Broad Street for over 30 years, signed a seven-year lease with options in the 15-story office building. Richard Charles from CBRE acted as broker, working with Brendan Berger of The Berger Organization, a privately owned diversified real estate company based in Newark. The Berger Organization owns and manages a portfolio of more than two million square feet of space in northern New Jersey and New York City.

According to Brendan Berger, demolition is underway and the company is currently working with its architect on plans for NJIUA’s new space, which will occupy half a floor in the 200,000-square-foot building located in the city’s central business district. Full tenancy is expected at the beginning of the summer.

The NJ Insurance Underwriting Association was created by the Legislature of New Jersey in 1968 to provide essential property insurance to any person unable to obtain insurance from a voluntary company.

“NJIUA has been an established presence in the neighborhood for decades, and it was important to the team there to find space close by, that offered the flexibility they sought,” said Berger. “We are looking forward to working with Steven Mutterperl, President of the Association, and his team, to develop an exciting new space at 570 Broad. I think they will be very happy with the change.”

570 Broad Street is situated directly across the street from the Broad Street light rail stop, which goes to Newark Penn Station and is within walking distance of Newark’s top cultural attractions, the Newark Public Library, new residential developments and Military Park. It is easily accessible to major highways servicing Newark and the New York metropolitan area as well as Newark Liberty International Airport.

For more information about this and other commercial or hospitality properties in the Berger portfolio, visit www.bergerorg.com.