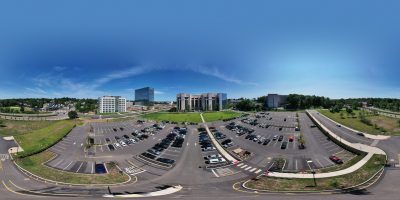 ON3 from Kingsland Street, Nutley

ON3, the world-class redevelopment of the 116-acre former Hoffmann-La Roche campus spanning Clifton and Nutley, recently celebrated its latest milestone when pharmaceutical giant Eisai Inc. took occupancy of the LEED Gold 200 Metro Boulevard tower. The move brought ON3’s 1.45 million square feet of office and R&D/lab product to 100% occupancy and marked the completion of the project’s Phase I.

“Today, this group of diverse businesses and institutions employs more than 5,500 people at ON3,” noted Prism’s Eugene Diaz, principal partner. “We are incredibly proud to have brought life back to this important site with an award-winning redevelopment. The ULI-NNJ honor is an outstanding testament to the quality and impact of our project – and we were thrilled to accept it on behalf of the property, our team, the blue-chip occupants who call ON3 home and the municipalities who work alongside us to create an enduring legacy of success.”

Supporting current and future development
To support the current and future development at ON3, Prism has completed construction of two parking structures on the campus. A 2,500-space structure serves both 200 Metro Boulevard and 100 Metro Boulevard (home to The Ralph Lauren Corporation). Additionally, the firm completed the construction of a second, 1,183-space parking garage to serve Hackensack Meridian Health employees and students. At 200 Metro, Prism completed extensive façade upgrades and additional renovations, as well as an inviting courtyard located between 200 and 100 Metro Boulevard with communal areas for future social and business gatherings.

Prism additionally has completed a more than $35 million campus infrastructure improvement program (including roadways, parking and utilities upgrades) to support this population and future development. Prism added and rebranded streets on the east portion of the campus, installed new sewer and storm water systems to be compliant with the latest NJDEP Stormwater regulations, and orchestrated electrical grid enhancements to further the green mission of the in-place Co-Hybrid campus infrastructure. On the west side, Prism has incorporated a robust roadway network – allocating and integrating development sites, and enabling the campus to be easily and fully traversed.

Expansive economic benefits
“In its heyday, the Hoffmann-La Roche campus consisted of approximately 4 million square feet of general office, manufacturing and R&D facilities,” said Prism’s Edwin Cohen, principal partner. “And it employed approximately 10,000 people. Its vacancy had negatively impacted housing values, and viability and profitability for many surrounding businesses that provided services to Hoffmann-La Roche employees. In short, it was a poster child for last-generation suburban campuses gone dark.”

As New Jersey’s largest redevelopment, ON3 carries expansive economic benefits, including thousands of jobs created, and it serves as a prime example of transformational land use and creative visioning in suburban redevelopment, Cohen added. “ON3’s strategic location on Route 3, a major thoroughfare, sandwiched between the Garden State Parkway and the NJ Turnpike – just nine miles from Manhattan – has provided Prism with an opportunity to create a property that speaks to the changing demands of New Jersey communities, residents and businesses.”

Prism’s vision for ON3 focuses on creating a world-class, mixed-use setting integrating office and R&D facilities, educational, recreational, hospitality and wellness options, as well as all other uses that will comprise the 24/7 environment. According to Diaz, ON3 illustrates the vital role of public/private partnership in suburban redevelopment.

“Prism views its role as one responsible for helping these municipalities reestablish themselves and their local economies by revitalizing this previously dormant and underutilized site into a benchmark in New Urbanism – creating long-term, sustainable value for the communities,” Diaz concluded.

Prism Capital Partners – which maintains its headquarters at ON3 – has a proven track record of creating value through select real estate investments and developments. Geographically focused in the New Jersey/New York/Connecticut market, Prism specializes in identifying, acquiring and creating distinctive, value-added opportunities in the office, R&D, education, retail, industrial and residential sectors. To date, the 20-year-old company, with its capital partners, has invested $750+ million in 18 projects totaling over 5 million square feet.