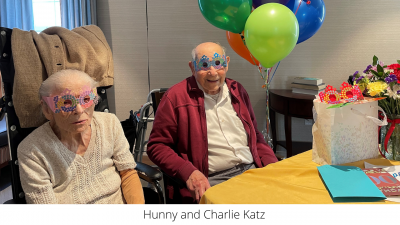 Charlie, a gregarious, fun-loving centenarian, remains busy at The Jewish Home and enjoys catching up with beloved family members and long-cherished friends on the phone. Birthday festivities at the skilled nursing facility included a surprise gift of a video from loved ones, featuring treasured photos and video clips of the couple, reminiscing on favorite memories with “Papa Charles.” Many reflected on his endless kindness, generosity, loyalty and resiliency.

Born at home on Jan. 24, 1922, Charlie grew up on Central Avenue in Long Branch, the youngest of three children. His parents, Eva Shapiro and Morris Katz, at the turn of the century immigrated to the New Jersey area from Lithuania; his father brought over eight sisters and brothers as well. Charlie followed in his father’s footsteps to become a Kosher butcher, later purchasing his own butcher shop (which Hunny helped him run).

A proud WWII veteran, Charlie served in the United States Army, spending three years in Africa and Italy; he was discharged after the war in 1945. As he explains it, there are two lives – one before the war and one after. In 1946, Charlie met Henrietta, the love of his life, on a blind date at a beach party in Long Branch.

“Charlie and Hunny are pure delights!” said The Jewish Home’s Randi Rae Treibitz, director of life enrichment. “It was a true pleasure for us here at The Jewish Home to celebrate Charlie’s 100th birthday, and everyone is looking forward to festivities for the couple’s diamond wedding anniversary.”

The pair married on March 9, 1947, and two children – Allan and Myra – followed. The couple spent most of their years in New Jersey, with a 25-year stint in Florida before returning home to the Garden State more than a decade ago.

“Charles is my everything, and every chance just to love him makes my day,” Hunny said, adding that he is loyal, smart and enchanting. Charlie says he loves Hunny’s beauty, charm and empathy, and her ability to solve human problems. Among their favorite memories are long drives and singing together to favorites like Bing Crosby’s “When Day is Done” and Ella Fitzgerald’s “Always.”

Today, the Katz’s tight-knit family includes four grandchildren and three great grandchildren – with another great grandbaby on the way. A favorite family memory is of Thanksgiving dinner, pre-pandemic, at his grandson’s home with four generations sitting around the table. “Hunny and I are beyond blessed by the close family we have created,” Charlie said.

Charlie reflects that he has seen the world progress right before his eyes through the century. His words of wisdom on creating a fulfilling life include “be happy, love long and hard because money is not everything.”

About The Jewish Home for Rehabilitation & Nursing