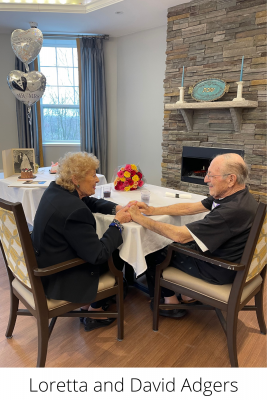 FREEHOLD, N.J., April 27, 2022 — You can tell from the way they gaze at each other, holding hands across the table, that David and Loretta Adgers have had a long and successful marriage. Indeed, say the lovestruck residents of The Jewish Home for Rehabilitation & Nursing in Freehold, it’s been “marital bliss.”

The couple, longtime residents of Monroe, N.J., met on an elevator in Miami Beach in 1956, and Loretta jokes that it has been “an uplifting event ever since.” At the time, both were Brooklyn residents, vacationing in Florida.

How did he win her, leading to an engagement six weeks later? David, she says, took the initiative, delivering milk and cookies to the room she shared with a girlfriend. That was their first date. Clearly, the gesture moved her. The two were married on April 6, 1957, one year from the day they originally met.

Today, they are the proud parents of a son and daughter, and now boast five grandchildren and two great-grandchildren. The couple waxes philosophical on the subject of creating and maintaining a happy marriage. For David, the primary rule is to stay together, to work things out. Loretta suggests that both partners should always be kind and caring, and never go to bed angry.

But whatever the reason, David and Loretta have created a strong bond, raising a happy family, and they are delighted to share their good fortune with friends and well-wishers at the Jewish Home.

About The Jewish Home for Rehabilitation & Nursing