HOBOKEN, N.J., July 8, 2021 – Mission 50 hosted a ribbon cutting ceremony to mark the official opening of the newly renovated and rebranded boutique office building and coworking community. Local officials and other key stakeholders affiliated with the project attended the June 24, 2021, event, which included a tour of the property and comments by Hoboken Mayor Ravi S. Bhalla and Greg Dell’Aquila, CEO of JDA Group LLC (JDA), which owns and manages the property. 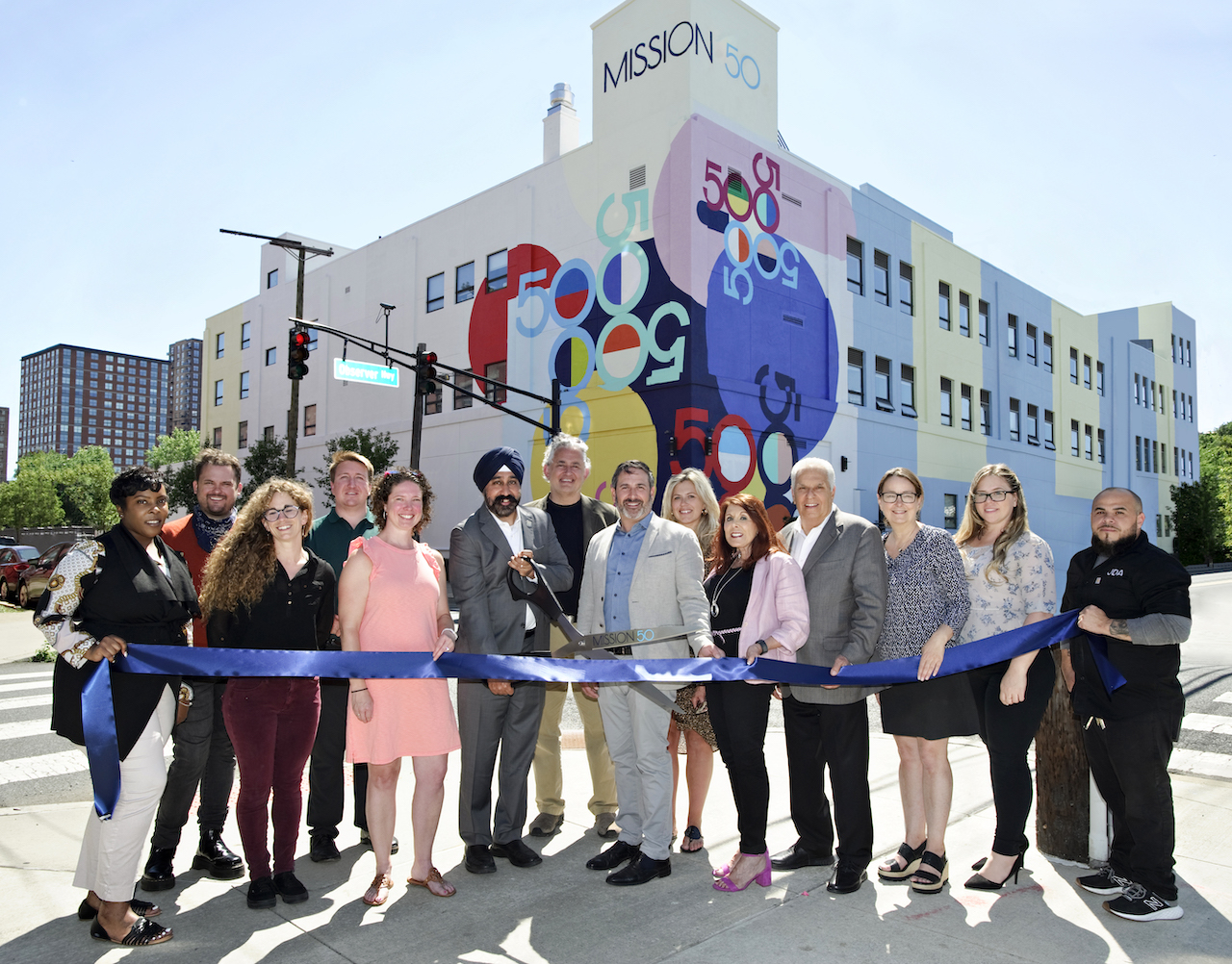 Mission 50 members and guests enjoyed a reception and happy hour in The Yard, a 1,000-square-foot outdoor amenity, that featured beverages provided by Hoboken Brewing Company.

Located at 50 Harrison Street, Mission 50 – the former Hoboken Business Center (HBC) – is one of Southwest Hoboken’s landmark office properties. JDA developed HBC in 2003 as an office destination for small- to mid-sized firms, and in 2011 it became home to the “original” Mission 50, a 3,000-square-foot penthouse coworking space for entrepreneurs, small businesses and freelancers. In early 2020, Dell’Aquila launched a year-long initiative that has transformed the 80,000-square-foot building into a unified community under the Mission 50 brand umbrella.

“What you see here today is a testament to Greg, his family and their dedication to the City of Hoboken,” said Mayor Bhalla. “Greg is not just a business owner but a resident. He has a vision for Hoboken and he’s willing to put his money where his mouth is and put real dollars, real investments, into this community.”

As one of the first premium coworking sites to open in the New York/New Jersey region, Mission 50 was – and remains – at the forefront of the flexible workspace market. The reimagined space responds to evolving workplace needs and fosters collaboration, creativity and productivity. Multiple workspace environments include shared coworking spaces, privacy pods, private office suites and traditional, fully customizable office concepts. A wide range of amenities and a menu of membership options cater to entrepreneurs of all stripes, ranging from solo workers and growing startups to seasoned businesses and traditional enterprises.

“Every time the city made an investment, we made an investment into the future of Southwest Hoboken,” said Dell’Aquila. “We’ve done upgrades to the exterior and throughout the whole building, including a complete renovation of the second floor.” He noted the city’s ongoing investment in revitalizing the neighborhood with the completion of the Southwest Resiliency Park, located just to the northeast of Mission 50. Plans were announced in April to double the size of the park after the city acquired an additional acre of land across the street. “We’re excited that we have the new park and look forward to the planned expansion. A lot of these ideas and visions that were talked about 15 or 20 years ago are now becoming a reality.”

Dell’Aquila believes that, as people slowly return to the workplace, community strength is essential to helping them reconnect, build new networks and support each other. To that end, Mission 50 members will benefit from a series of carefully curated experiences and engaging programming that cultivates a sense of community. Planned events include networking, guest speakers, pitch competitions, scotch tastings, guest bartenders, and gaming events. “Everything we have done at Mission 50 is designed to inspire people and get them excited about coming to work again.”

Commenting on Mission 50’s long history of serving the community, Fourth Ward Councilman Ruben Ramos said, “Mission 50 is one of the anchors of Southwest Hoboken. It has a great track record of enhancing the community by being a unique place to work. Also, the building’s design is eye-catching and complements the feeling of the neighborhood. JDA Group continues to be instrumental in investing in Hoboken and shares a vision that is very future-looking.”